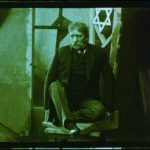 The City Without Jews, an Austrian silent film from 1924 that predicts the rise of nazism, has, after 90 years, been saved from decay. In 1991 a fading copy of the film was found in the Netherland’s Filmmuseum and then, thanks to a chance discovery of original footage in a Parisian flea market in 2015, the Austrian Film Archive was able to painstakingly restore the film which had its premiere in Vienna in March 2018 .

Based on a dystopian novel by bestselling Jewish writer and journalist Hugo Bettauer, Die Stadt ohne Juden (“The City Without Jews”) became his most controversial and successful book translated into many languages and made into a movie like several of his other books, notably Die freudlose Gasse/The Joyless Street directed by G.W. Pabst. Die Stadt ohne Juden, a satire about the acutely topical subject of anti-semitism, not only shows the economic circumstances that led to a flaring up of political antisemitism but also plays very prophetically, using stereotypes and caricatures, through the consequences of a rapid exodus of the Jewish population of Vienna. It is the end of the first world war, inflation is soaring and the inhabitants of a German-speaking city are starting to turn on each other. Politicians are quick to find a scapegoat: “The people,” the chancellor announces, “demand the expulsion of all Jews.”  But sentiment changes when, without Jews, theaters go bankrupt and department stores, hotels and resorts suffer from lack of customers. The economy declines to such an extent that the parliament votes to invite the Jews back.

The premiere took place on 25 July 1924 in Vienna. Bettauer and H.K. Breslauer, the director, fell out entirely, and Bettauer later refused to acknowledge any connection between the film and his book. Technically inferior prints were often manually cut and shortened by the cinema owners themselves and Breslauer’s cut ends by revealing the entire dramatic action as a dream thereby changing the message of the book drastically. “This surprising turn of the plot,” says one reviewer, “deviating totally from the literary original, cannot merely be regarded as a simple dramatic exigency, but as a prime example of the Austrian soul’s ability to repress.” Breslauer’s changes tried to reduce political controversy but the auditoriums were often full, not only in Austria but also in Berlin (premiere 1926) and New York (premiere 1928). National Socialists often sabotaged the screenings; in Linz the film was banned altogether. Bettauer was attacked as the “Red Poet” and “corruptor of youth” calling in Austria for “lynch justice against all polluter of our people”. In March 1925 he was assassinated in Vienna by a Nazi Party member who was convicted of murder but released from jail shortly thereafter. Breslauer’s career as filmmaker ended with Die Stadt ohne Juden. He joined the Nazi Party in 1940 and died impoverished in 1965 in Salzburg.

The newly restored film ends in the spirit of Hugo Bettauer’s book. Without the Jews to blame, the Nazi party collapses; the expulsion law is repealed, and the Jews are welcomed back by the mayor of Vienna.

Thanks to Jerry Garchik, who had urged the SF film community to take a look at this important film long before the recent restoration began, it is now part of BLESS MY HOMELAND FOREVER: AUSTRIA’S SORDID PAST at the 38th SAN FRANCISCO JEWISH FILM FESTIVAL