THE AUSTRIAN TOUCH at Frameline 43 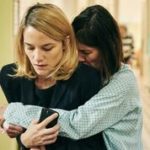 When we talk about “Austrian Cinema” the famous names of Pre- and Post-War2  are often incorrectly thought of as German, for example Maximilian Schell, Romy Schneider, Hedy Lamar, Oskar Werner, Curd Jürgens, Klaus Maria Brandauer, Arnold Schwarzenegger (always Austrian),  Christoph Waltz, and directors like Billy Wilder, Fritz Lang, G.W. Pabst, Josef von Sternberg, Otto Preminger and Fred Zinnemann.  Most of them pursued careers in Germany and in the United States. The 1950s brought Austria the largest film production boom in its history. Heimatfilm was the focus. Without national subsidies neorealist or New Wave schools that had revitalized other European cinemas during this era had not yet developed. By the late 1960s the commercial Austrian film industry had collapsed. Austrian television became the medium for entertainment film. The short films of the radical Viennese Actionism movement rejected narrative structure completely, and Austria’s alpine landscape, as well some of its directors and actors, were used for West German comedy productions.

Not until the late 1980s, when national subsidies had arrived, did a new generation of Austrian filmmakers establish themselves at home and in the first decade of the 21st century, Austrian cinema found its long-delayed New Wave and gained international critical success. Michael Haneke, Barbara Albert, Ulrich Seidl, and Michael Glawogger among others, entered the international circuit with disturbing often shocking films like Funny Games, Dog Days, Megacities, Free Radicals. Compared to their German counterparts they dissected society in much harsher, darker, more sarcastic or cynical ways. That trend has continued until today.

Marie Kreutzer’s film, Der Boden unter den Füssen, seems to prove the point. It’s like “Toni Erdmann” without the comic relief, to sum up my immediate reaction. Lola (Valerie Pachner), an attractive workaholic with a business career on the fast track to success, manages her personal life with the same ruthless efficiency she uses to optimize profit margins. She keeps her relationship with her boss Elise a secret, as well as the existence of her older sister Conny, who has a long history of mental illness. When she learns that Conny has attempted suicide, Lola’s life seems to unravel and the secrets threaten to explode into the open. As in “Toni Erdmann”, a driven young woman tries to make it in the glitzy business world but family interference shakes up the ground under her feet. Kreutzer’s film is a dark, twisted psycho-thriller with many secrets and characters bordering on clichés. But fine performances and good camera work should keep your eyes glued to the screen. The film premiered in the competition of the 2019 Berlinale.