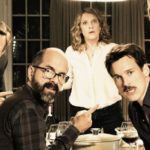 Der Vorname/How About Adolf is a remake of the French film Le Prénom from 2012, a huge success in France but at that time not in Germany. However the new film by Sönke Wortmann (Das Wunder von Bern, Der bewegte Mann) adjusted to the present political and social trends and wrapped into a feel-good narration became an audience favorite in Germany as well. A dinner party in the family – host Stefan, a  know-it-all professor of literature lectures everybody incessantly about everything, from the dangers of eating pizza to Goethe’s thoughts about names. How can his wife stand him? We will have to wait to the end of the film when she has the last word – not her smart-ass husband  –  wrapping up an evening that almost ended in a family feud.  Her brother, a school drop-out turned wealthy realtor, is expecting his first child, a son, they intend to name Adolf. That gets the ball rolling. How can you name your child Adolf? The family is shocked. Fast moving, aggressive talk turns into personal attacks unravelling long-held prejudices and grudges. To keep the dramatic arc from collapsing, new things have to be thrown into the discussion – flash-backs spike up the story, family secrets are revealed and when things seem to fall apart the hostess/narrator attaches a feel good happy ending to the story. Compared to the French film of 2012, Wortmann has focused on the comedy aspects mellowing down the political, social implications. But a smart screenplay with unexpected twists and turns, fine performances and fast-paced dialogues make up for the short comings. (In German with English subtitles)

The Tobacconist/Der Trafikant is based on the bestselling novel by Robert Seethaler who is acting in this film that takes us to 1937 Vienna. 17-year-old Franz is sent by his mother from the idyllic countryside to the big city to apprentice for a tobacconist, her former lover who is Jewish and has fought in the Great War where he lost a leg but keeps the door of the smoke shop open for all and any customer. One of them is Sigmund Freud – Bruno Ganz in one of his last performances shines as a grandfather-like advisor for Franz on all things sexual. A coming of age story in difficult times that exposes Franz to so many hardships from coming to terms with his sexual awakening and meeting the father of it all, Sigmund Freud, to antisemitic atrocities at his workplace and falling in love with a young  prostitude. Unable to digest it all in the course of just a year Franz seems to move from one plot point to the next without showing how much it touches and changes him. The friendship with Freud shifts the focus from the tobacconist at the center of the  political turmoil of antisemitic attacks to Franz’s teenage preoccupation with sex and does not really allow him to develop emotionally any of the inner and outer upheavals shown in the film. Vienna in the late nineteen thirties has been beautifully reconstructed and that alone is worth seeing The Tobacconist. (In German with English subtitles)