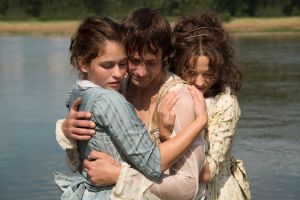 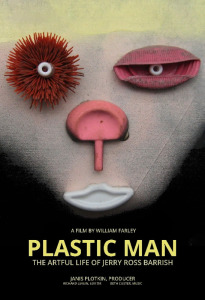 The 37th Mill Valley Film Festival Oct 2-12, shows many films in different programs from the usual narrative features, docs, and shorts, to a variety of sub focuses, like World Cinema, Humor, Science, Viva El Cine! and more. It has always been hard for me to decide what to see  across the bridge considering heavy traffic and no parking. So here my 2 recommendation: Die geliebten Schwestern / Beloved Sisters, (playing Oct 10 & 12), the only German language film (there are a few other films with German spoken in them) and Plastic Man, (Oct 5 & 8), a film that could have been listed under “Humor” because the stuff that Jerry Barrish has made out of found objects, is very funny.

My background is in literature, I have read Goethe and Schiller, know about Goethe’s interest in women throughout his long life (at 73 he proposed to an 18 year old) but I never heard about Schiller’s women. He was poor when he married Charlotte von Lengefeld had several children (4) and died early (age 45) from tuberculosis. A rather short, productive life devoted to poetry, political causes, to duty and beauty (ethics and aesthetics) and to a collaboration with the older Goethe,  Schiller’s story gets a new spin in BELOVED SISTERS. Director/writer Dominik Graf connected the few known pieces of a largely unknown puzzle to a passionate love story between Schiller and his wife’s sister Caroline who had a husband and money but was bored with life until she met Schiller who not only ignited in her a passion for love but also for writing. The problem was how to include sister Charlotte who felt more love and loyalty to Caroline than to her husband and had no interest in a menage a trois. She would rather sacrifice her own sex life with her husband (the first child was born 3 years after the wedding) than demand from her sister to end the love affair. Rewriting the biographies of famous people who simply did not leave enough traces of their love life behind has fascinated filmmakers for decades. From Beethoven’s “Ferne Geliebte”  to Georg Trakl’s  relationship with his sister (Taboo – The Soul is a Stranger on Earth), Beloved Sisters gives a compelling account of the largely unknown triangle. Beautiful period details, breathtaking landscapes, great acting, especially by Hannah Herzsprung (Caroline) dominate the endless exchange of coded letters, perhaps included to  lend authenticity to a speculative drama. It worked for me.

Jerry Barrish is anything but a “Plastic Man”. Made out of real stuff he has for decades supported independent film, art, and independent people, he has created an oeuvre of films and unusual sculptures that makes you wonder what kind of a guy he really is – pedantic collector of plastic, whimsical artist, cultural critic, creative activist. His art does not just document a passion for perfection but a touching insight into life’s bearable lightness of being.