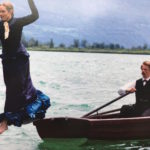 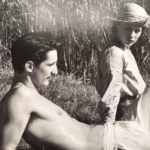 Strong women and weak men stayed with me from this year’s Berlin & Beyond. I only saw a few films, some of them revisited – Vor der Morgenröte, Fukushima Mon Amour (comments see in the post below), Eva Hesse (touching, insightful – has been shown in Bay Area Theaters) and Close to Your Heart (a star-studded TV film portraying in “Berliner Schnauze” a lonely woman’s path to independence). My new discoveries were In Love with Lou – A Philosopher’s Life and Frantz. Directed by veteran French director François Ozon, Frantz is loosely adapted from the 1932 Ernst Lubitsch drama Broken Lullaby, a World War I story of guilt, grief and hate most of it taking place in a small German town. A young German woman, mourning her fiancé killed in the war follows the man seems to be the last one who had seen her fiancé alive from Quedlingburg to Paris and beyond. On her journey, an emotional roller coaster full of surprises,  she discovers a new life in the country that killed her lover. Shot mostly in black and white this quiet and contemplative film takes us back in time and addressing big timeless questions of prejudice, guilt, grief and forgiveness. (Shown at Sundance and soon to be released.)

Lou Andreas-Salomé, the strongest of all the women I saw on the screen of the Castro, seems to belong to a different category. Fiercely independent from early on she paved herself a path that nobody understood, leave alone, followed. When studying literature I came to know Lou Andreas-Salomé as a writer, philosopher, psychoanalyst who was loved and admired by famous men. We never read any of her works only what Rilke and Nietzsche and Freud wrote about her. The film, directed by Cordula Kablitz-Post, enforces that image. Beautifully shot with postcards marking the journey of her life and well acted by the three women we follow from adolescence in Russia (Liv Lisa Fries) to the femme fatale (Katharina Lorenz) surrounded by famous men to the seventy-year old (Nicole Heesters) dictating her life story to a young man. Friendships with women are not mentioned in this film, her work as a writer and psychoanalyst barely. How could it be included? Rilke wrote beautiful poems for her but what did she write about him? Letters, for sure, some were quoted. And what did she discuss with Nietzsche? His philosophy, for sure, that has a prominent place in literary studies  – but not the works of Lou Andreas-Salomé. I liked the film even though it did reinforce a Lou I had known many years ago.