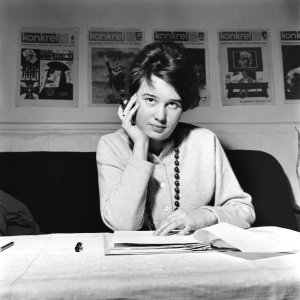 Another year, another 2 exciting weeks of tons of films to pick from. My very small selection – due to other commitments, like babysitting granddaughter Ella and fighting the building of a monster home next door – I chose 7 films and here my favorites: THE POSTMAN’S WHITE NIGHTS (Russia), EL CORDERO (Chile) and A GERMAN YOUTH (France, Germany), not necessarily in that order.

A GERMAN YOUTH, a documentary film about the Baader-Meinhof group that wracked Germany in the ’60th and ’70s, is a compilation of only found and archival footage, no voice over, no narration. Focusing on Ulrike Meinhof, the articulate, intellectual center of the group, French director/editor Jean-Gabriel Périot reveals her increasingly radical actions by following Meinhof’s more and more radical statements to media and public. Her story becomes the powerful narrative of the film, dramatic, intelligent, destructive and deadly. From the two dozen or so films made about Baader-Meinhof this one sticks out not just because of an amazing editing job of tons of material but because this film stays with you, definitely with me who lived in Germany in the ’60s and ’70s, and saw Ulrike Meinhof live what she preached: “Protest is when I say this does not please me. Resistance is when I ensure what does not please me occurs no more.”

EL CORDERO tells the story of Domingo, a devoted family man and Christian missionary whose uneventful life takes a turn when a fatal accident leaves him, disturbingly, without a sense of guilt and nobody, not the priest, not his family, not a wicked convict, seem to get him back on a moral track. As my friend Victor pointed out, Chile’s dictators also used the church as convenient cover-up for guilt. Like Domingo they added more and more atrocities with the blessing of the church; and like Domingo, the outside world accepted them as save guards, not responsible for the horrors. Spiced with sardonic humor and excellent acting this dramatic thriller reverberates deep questions about Chile’s past.

THE POSTMAN’S WHITE NIGHTS feels like a documentary with real people playing real people in a remote corner of northwestern Russia. Postman Lyokha brings the mail and the pension checks to an aging community of island dwellers who spend their days fishing, complaining, remembering the good old days, and drinking vodka. A boat with an off-board engine is what everybody needs to get around the lakes, especially the postman. When he finds his boat one morning without engine he knows that one of his neighbors must have stolen it. Nobody is willing to help him, rowing is the only way now to get to the post office on the other side of the vast lake. Breathtaking cinematography, humorous encounters with the authorities, with village folks and city dwellers, as well as surreal outings into fairyland-like landscapes imprint ravishing imagery on the viewer’s eyes that are hard to forget.

A few words about the runner-ups. STATIONS OF THE CROSS/KREUZGANG follows 14-year-old Maria in 14 scenes of mostly fixed shots on her way to the cross, sacrificing herself like Christ. Formally rigorous and fascinating the film’s characters, especially the mother, are too one-dimensional. Too soon we know how each of the characters will  contribute to the sad ending.  Remember REQUIEM, also about religious fanatics; that was a great film. THE TRIBE, another interesting experiment with deaf actors playing deaf young people who have to go through torturous initiation rites in order to become part of the “tribe” ultimately failed because the focus on the cruel “rites” did not allow the characters to develop into anything but victims of each other, of the delapidated school they are attending (in Ukraine) and the system. But the outside world is hardly addressed. THE WONDERS, a coming of age story with a much happier ending than STATIONS OF THE CROSS, centers on a young girl helping her family to keep the beekeeper business against all new developments that might ruin them. Rural life in northern Italy, a dysfunctional family, adolescence, humor, fairy tale surprises and lots of open ends – too many. BOTA felt to me like a film about Albania made by Albanian film students living in the US. The filmmakers were looking for the unusual, a place where no one lived, music that no one knows in Albania, characters dancing in an internment camp, an old woman showing all the wrinkles of a hard life but happily drinking an espresso every day.  That would have made a great center piece uncovering Albania’s years under the horrible dictatorship through the face of that old woman. The film touched the past only on the sideline.