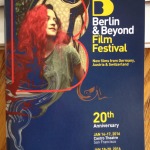 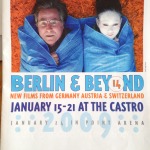 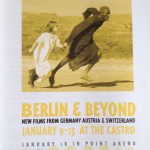 A 20-year-anniversary  deserves a few words about the beginning and since I was there when it started let me reminisce a bit before I say a few words about the films I saw last week. Berlin & Beyond opened at the Castro Theatre on January 11, 1996 with Rainer Werner Fassbinder’s MARTHA.  Not a cheerful opener but Anita Monga was the program adviser and she pushed hard to get the newly discovered MARTHA to open the series. A mesmerizing, disturbing film that set the tone for the years to come.  The 2nd B&B opened with SEXY SADIE by Matthias Glasner who came back 10 years later with THE FREE WILL; Tom Tykwer’s WINTER SLEEPERS opened the 3rd B&B, his DEADLY MARIA was shown at the first one.  I remember a packed house when Doris Dörrie presented NAKED, an attractive title, and when Bruno Ganz stopped by for DOWNFALL on his way to the Academy Awards.  Equally memorable were the best first feature films  by young talents – APRIL CHILDREN (Yüksel Yavuz), VALERIE (Birgit Möller), WHEN THE RIGHT ONE COMES ALONG (Oliver Paulus & Stefan Hildebrand), BUNGALOW (Ulrich Köhler), FASHION VICTIMS (Ingo Rasper).  Since 1998 Kinofest Lünen presented their often quirky audience award winners – 7 BROTHERS, AM I SEXY?, or JEANS, actress Nicolette Krebitz’s debut film (as I’m writing she is presenting her 3rd feature at Sundance). And there was our wonderful side-kick in Point Arena and Oz, the apple farm where talents and guests stayed for a weekend in rustic cabins with out-houses, mice, starry nights and, in January, often lots of rain. Those were the days… Oz has been sold, the theater in Point Arena is still showing films, sometimes with subtitles.

What happened to those edgy, quirky, dark, brooding films coming from Germany, Switzerland and, of course, Austria? I can’t find them in the more recent B&B programs. Ulrich Seidel is still making movies, so is Nicolette Krebitz, Christoph Hochhäusler  and all the filmmakers belonging to the so called Berlin School. Last week at the 20th Berlin & Beyond I saw 4 films and I had previously seen 2 more listed in the program – not really enough to talk as an insider about trends and changes, but just as a film friend who for many years was very involved.

I like the graphic design, especially on the big screen of the Castro Theatre. The program itself is hard to navigate, no page numbers next to the films, no alphabetical order. A GERMAN YOUTH, was one of my favorites. A  collage of historical footage that re-created the story of Germany’s Red Army Faction, or Baader-Meinhof group, here with Ulrike Meinhof at the center. An amazing editing job that produced an insightful, comprehensive, even touching picture of the historical events. Why was it shown on the small screen of the Goethe-Institut and not at the Castro, I wonder. Just because it was on the program of the SFIFF last May?

Another film portraying more recent history – WE ARE YOUNG. WE ARE STRONG. – I saw at the Castro. A narrative feature film about the riots in Rostock in 1992 that shocked Germany. How could a whole town attack asylum seekers, Gypsies, as well as hard working foreigners that even the police did not grant protection. The film focuses on a group of young people and their part in the riots. Shot in black and white for the first half the images create an atmosphere of boredom, disconnect, neo-nazi violence and sexual competition among the youngsters that ends abruptly when the riots begin. A sudden change to color shows the events unfolding chaotically, the police all of a sudden disappears, politicians are clueless. My friends confirmed that the sequence of events as told in the film is correct. Those of us who don’t remember could have greatly profited from a Q&A after the film with  an historian, or politician or an eye-witness.

A COFFEE IN BERLIN (OH BOY) and BERLIN, SYMPHONY OF A GREAT CITY are also 24 hour portraits but of a very different nature. The silent classic is always worth seeing again, here accompanied by ALP, a rock band. The musicians played their hearts out and sounded great but the music was not really in sink with the images of this film. OH BOY was shown as part of the Spotlight Award presented to Tom Schilling, a young talented actor who told me that his favorite role was in the TV mini series GENERATION WAR (see my comments further down from last year). I liked his portrayal of young Hitler in  MEIN KAMPF (2011) a farce adopted from a popular play of the same name by George Tabori. The film was so controversial that is not even listed on Schilling’s Wikipedia page.

I also saw 2 comedies – Til Schweiger’s HEAD FULL OF HONEY, another one of his hugely successful comedies in Germany, this time focusing on a serious topic – Alzheimer.  MS. MUELLER MUST GO features special guest of B&B 20, Anke Engelke, who I remember  from the opening ceremonies of the Berlinale where she not only gave witty, lively intros with festival director and old-time B&B guest Dieter Kosslick, but she also looked fabulous in daring designs on very high heels. Last week I finally met her in person and found that she was just as personal, open and funny as I had imagined her to be.