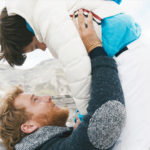 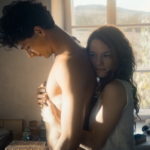 The 22nd BERLIN & BEYOND opens with WILLKOMMEN BEI DEN HARTMANNS, a “Familienkomödie” by Simon Verhoeven, son of Senta Berger who plays Frau Hartmann, and Michael Verhoeven, well known to B&B audiences and co-producer of the film. Since Western Europe opened its doors to refugees from Africa and Asia countless films have dealt with the hardship of the migrants, among my favorites are FIRE AT SEA, an outstanding documentary from Italy and the light-hearted, quirky film from Finland, THE OTHER SIDE OF HOPE. Verhoeven’s film, hugely successful in Germany, is about a wealthy family in Munich that takes in a refugee from Nigeria for therapeutic effects. Frau Hartmann needs company after her children have left home to pursue questionable careers and her doctor husband, searching for eternal youth, doesn’t want to retire. Enter Diallo who first shakes things up not only in the family but around the neighborhood, and eventually brings the Hartmann’s back together.  A feel-good comedy with predictable plot lines and characters that fit the comedy mold played by Germany’s best, beloved Senta Berger and Heiner Lauterbach, Elyas M’Barek, the star of Fak ju Göte, and Florian David Fitz, special guest at B&B a few years ago.

Jan Zabeil’s DREI ZINNEN / Three Peaks follows the path of his 2011 film, DER FLUSS WAR EINST EIN MANN /The River used to be a Man, also featuring Alexander Fehling in a great performance of losing himself in the marshland of Botswana. Here it is the dolomites where a drama between mother, son, and boyfriend unfolds with nature stepping in as major player. Long shots of foggy, snowy mountains that seem to swallow up our protagonists create a stunning poetic landscape that stayed with me – in contrast to the story that had an adverse effect on me, a divorced mother of two.  Lea (Bérénice Bejot) wants Tristan, her 7-year-old son (Adrian Montgomery), to bond with her boyfriend Aaron (Alexander Fehling), the ideal father who is strong, courageous, loving, caring, handsome, talented, but the boy should not get too close to him, since there is a father she left 2 years ago. He still cares, calling constantly, and he should not be replaced, says the mother. Hinged on this contrived plot line of love and guilt the little boy is carrying a burden that seems too hard for him to , albeit in three languages. In the end Zabeil moves into melodramatic territory that only Fehling knows how to cope with. Grade:

Egon Schiele died in 1918 at the age of 28 three days after his 6 months pregnant wife. The closing night film depicts his art and life seen through the lens of Schiele’s last few days, when tormented by the fever of the Spanish flu that killed 20,000 000 throughout Europe, cared for by his beloved sister and still sketching his wife on the deathbed (omitted in this film). The work Schiele is most known for depicts the body of women, his sister, models, lovers, his wife, in naked, erotic, pornographic, twisted, disturbing poses. He was arrested for seducing a 13 year-old girl but after 3 weeks in prison and many of his drawings destroyed by the police, the charges were dropped but he was found guilty of exhibiting erotic drawings in places accessible to children and one of the art pieces was burned by the judge in front of Schiele’s eyes. Dieter Berner, known for acting on stage and in films, including Michael Haneke’s, directed DEATH AND THE MAIDEN, the short life of a passionate, obsessive artist played by Noah Saavedra, a new face from Austria, in a seductive, beautiful performance. The young Schiele can’t live without paper and pencil and not without Wally, his long-time model and love of his life who left him when he decided to marry one of the sisters from a well-to-do family. He had hoped to survive active service in WWI with his wife’s support and still continue a relationship with Wally, but his life took a tragic turn. Wally never saw him again. The film’s title refers to one of Schiele’s most disturbing paintings showing a woman – Wally – in the throes of death. I wish this image had been shown longer on screen.

JOSEPH BEUYS by veteran German documentarian Andres Veiel is definitely worth seeing, especially since the focus is not so much on Beuys’ art but on his political activities as an agitator. Composed by an array of collages that stir up his fraught life the viewer will hardly find time to take a deep breath and put the puzzle of all the images together – but that’s Joseph Beuys.