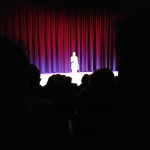 The only German film in the competition of this year’s Berlinale, GOLD, by Thomas Arslan who is know for making films in the Berliner Schule tradition (i.e. slow, composed, detailed) seems to have tried something different, a German Western starring wonderful and ubiquitous Nina Hoss. Here a review from DER SPIEGEL http://www.spiegel.de/kultur/kino/berlinale-wettbewerbsfilm-gold-rezension-a-882341.html High marks are given to Ulrich Seidel’s HOFFNUNG, the last part of a trilogy (LOVE premiered at Cannes 2012, FAITH at Venice 2012, and now HOPE); the three films will come to YBCA in June. Seidel fans mark your calendar! Here SPIEGEL’s comments – auf Deutsch http://www.spiegel.de/kultur/kino/berlinale-ulrich-seidl-zeigt-abschluss-der-paradies-trilogie-a-882178.html

More German events in the Bay Area: an ongoing Werner Schroeter retrospective at the PFA http://bampfa.berkeley.edu/filmseries/schroeter. Known as one of Germany’s revolutionary filmmakers, he is famously liked and disliked. One of my first film projects at the Goethe-Institut was promoting a Schroeter retro in the early nineties when he came to town. Dinner with him after one of the screenings turned into a monolog, flamboyant, intense and eccentric. I’m glad I met him. He died in 2010.
Check out BOY, a music gig coming to the Swedish American Hall on March 6. Consisting of two beautiful young women from Zuerich and Hamburg who sing in English, BOY was part of the opening act of last year’s Berlinale and their fan club is growing. The duo isn’t easy to find online, (too much Boy on the web) but here my best bet http://www.listentoboy.com/index2.php and tickets are available at http://www.cafedunord.com/calendar/3|2013|15

Don’t miss these German films showing in the Bay Area – there aren’t that many and these are favorites of film snobs and other film apassionatos. At Cinequest ,O BOY, a new film recommended highly by Charlie Cockey, one of the snobs and programmers of Cinequest, and RUN LOLA RUN screening in Petaluma. She has been running for many years but hasn’t lost any of her appeal, especially after Tom Tykwer’s latest disappointing collaboration on CLOUD ATLAS.