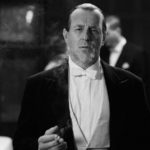 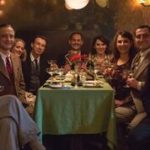 Here what I saw of the half-dozen or so German-language films in the program – FRITZ LANG, BYE BYE GERMANY and TRACKING EDITH. Gordian Maugg, director of FRITZ LANG, was a frequent guest at Berlin & Beyond when I ran the show and his best films – Olympischer Sommer, Zeppelin, Hanns Warns and the 20th Century – are still on my mind.  Watching them felt like I was examining an old photograph under a magnifying glass until the photo looked back at me in a new, hardly recognizable way.  Maugg has a special way of mixing seamlessly archival footage with new material – how would he apply that to FRITZ LANG, who, unlike the common people in his earlier films caught in the crosshair of history, was by 1929, Germany’s most famous filmmaker. FRITZ LANG starts in 1928 when Lang was at a low point in his career. His latest film,  FRAU IM MOND was not as successful as the earlier hits, he had no good idea for a sound film, the love for his writer/collaborator wife Thea von Harbou had ceased long ago. That’s when he reads in the paper about Düsseldorf’s hunt for a mass murderer and the inspiration for “M”, the first great, perhaps greatest, sound film of film history, was born. Although Lang denied any parallels between Kürten in Düsseldorf and “M” in Berlin Maugg’s film, based on extensive research, goes that path. Lang takes the train to Düsseldorf and alongside Berlin’s famous Kommissar Gennat, starts his own investigation into the motives, character and past of the murderer and the more he uncovers the more similarities he sees between his own past and that of Kürten: both shared a painful childhood with a violent father, both committed murder – Maugg’s Lang shot his first wife in the chest when, in 1920, she surprised him in bed with his then secretary Thea von Harbou (Gennat worked on the case and it was closed as an accident). The film suggests that Lang’s crisis of the late 1920s started when his wife was killed, may be before, and it was only resolved when he confronted his own past. The story is embedded in an intricate collage of archival footage from newsreels, the real Fritz Lang, and clips from “M” resulting in a brilliant montage that, like Maugg’s earlier films, mix old and new so perfectly that it can not be distinguished. An assembly of great actors –  Samuel Finzi as Kürten, Thomas Thieme as Gennat and Heino Ferch as a stoic, arrogant Lang – tell a story that is not always based on the truth, but it opens up unchartered, enticing territory that should not be dismissed. Jay Weissberg of Variety gave the film a devastating review, describing it as a “luridly fictionalized mess”, “an embarrassing  pseudo biopic”.  I however agree with Andreas Kilb (Frankfurter Allgemeine) who says that Maugg’s thriller (not a biopic) is an enrichment for the German cinema. And Rüdiger Suchsdorf asked why was this inventive Berlin-film not shown at the Berlinale?  Good question, Herr Kosslick.

BYE BYE GERMANY, a Holocaust survivor dramedy was accepted by the Berlinale. Since TONI ERDMANN we know that Germans do have a sense of humor and this film proves it again with a story not often told – about Jews who survived the camps and chose to stay in the devastated Germany. Only about 4000 stayed and “None of them could ever tell their children why they did it” say the end titles. “Es war einmal in Deutschland” , the German title, seems to do just that, tell the fairy tale stories of the survivors as if it happened a long time ago and doesn’t concern us anymore. Misleading but capturing what happens in this film. Fast talking hustler David Bermann (a perfect fit for Moritz Bleibtreu) is recruiting Jews from the camp of displaced persons in Frankfurt for a shady business venture. It involves selling linen – what the Bermanns did before the war – to highly inflated prices to the Germans who helped sending them to the camps.  The horror stories of the survivors – told in flashbacks by everyone of them – of course totally justify the scam. Only David’s story is different. On suspicion of having been a collaborator he is interrogated by American special agent Sara Simon (Antje Traue) – who does not believe what he tells her –  that he survived the camps by telling jokes and he was so good at it that an SS commander sent him to the Berghof to teach Hitler how to do it. Based on two of Michel Bergmann’s novels inspired by his own family history, the film by Sam Garbarski is a 100 minute tour de force of many funny – and sad – stories that never reach into questions of guilt, collaboration and justice. Instead we are presented with a neatly reconstructed, destroyed city of Frankfurt, tailored suits and a perfect mustache of David Bermann, Yiddish words throughout the dialogues supposed to add authenticity – but they feel tagged on. Just like the last of the interrogation sessions with Sara, the stiff, special agent, who decides to move it to her bedroom. Nice, pretty, entertaining but unfortunately not much else.

TRACKING EDITH follows the colorful, adventurous life of photographer and communist spy Edith Tudor-Hart from her birth place in Vienna (1908) to the Bauhaus in Dessau where she studied art, to London where she worked as a teacher with Maria Montessori and became involved in left-wing politics, to Berlin where she married Alex Tudor-Hart and fled back with him to England in1933 when the Nazis came to power. Told by filmmaker and great-nephew Peter Stephan Jungk we hear about his aunt’s tumultuous love affairs, her career as a photographer and her activities as a spy recruiting the Cambridge Five that gave atomic secrets to the Soviet Union. Very impressive are the photographs she took – always with a Rolleiflex – of her friends and colleagues, of herself and on assignment documenting her social and political ideas. Her face looks intense, her life seems intense, devoted to a cause and always on the edge from early on – she left her family at age 16 to be on her own. To fill the narrative gaps the filmmaker added animation to the interviews – and Edith’s face lends itself beautifully to being animated – but it adds another layer of distraction to her turbulent life. I would have preferred to see the story hinged on her photographs, rather than the curator’s comments about her photos. I would have liked to hear more about the ending of her spy involvement and less from the people in Moscow who didn’t allow the filmmaker access to the archives. Why was she not arrested after her activities were uncovered?  Several of the Cambridge Five ended up in the Soviet Union, poor and miserable because they refused to accept money for work they passionately believed in. Edith stayed in England and took care of her schizophrenic son. Eventually she opened an antique store in Brighton. Her life ended in 1973 in a hospice and with a funeral that no one attended.