Worth watching: THE PEOPLE VS. FRITZ BAUER & A GERMAN LIFE 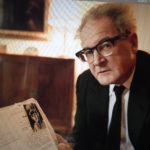 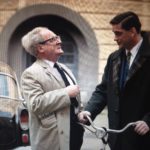 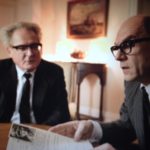 THE PEOPLE VS. FRITZ BAUER translated from the German title DER STAAT GEGEN FRITZ BAUER misses a small detail, it is not the people – das Volk – but the government of Konrad Adenauer and its legal representatives all still with close ties to the Nazis that attorney general Fritz Bauer is fighting against. A thriller that dramatizes everything to the max from the obstacles Bauer (portrayed powerfully by Burghart Klaussner) faces in trying to hunt down Adolf Eichmann to his personal life of being Jewish and gay the film feels more like TATORT than an historical drama. Especially the gay part leaves room for improvement  – to add a fictionalized young gay state attorney who recognizes his counterpart by the colorful socks and then sacrifices himself adds more melodrama than necessary. Director Lars Kraume rekindles a conversation that was addressed in the strong 2014 film LABYRINTH OF LIES (see my comments further down on this blog), where a young  public prosecutor initiates the Frankfurt Auschwitz Trials of 1963 (with Fritz Bauer played by the late Gerd Voss). Although Kraume’s film does not quite succeed it is significant because it deals with German history that has long been skewed in order to accommodate those that had lots to lose. Most of those are dead now but the next generations need to be reminded again and again that Chancellor Adenauer and Mercedes Benz and the whole justice system were entangled with the Nazis and that paragraph 175 continued until 1994! what the Nazis had perfected: criminalizing  homosexuels. 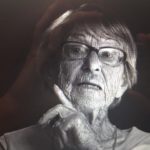 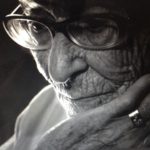 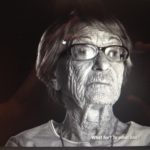 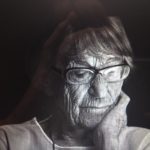 A GERMAN LIFE also reframes a conversation that had reached a highlight with engrossing 2002 film BLINDSPOT – HITLER’S SECRETARY by Austrian filmmaker, artist André Heller. The title told us what would follow, a testimony of the woman who had worked for Hitler as his private secretary. Traudl Junge ended with him in the bunker where he dictated her his will. I remember the film’s premiere at the Berlinale and waiting full of anticipation for Traudl Junge then eighty-one, the first and only eyewitness close to Hitler I would ever see live. She did not appear on stage. She had died a few days before the film’s premiere – her testimonial of not knowing anything about the atrocities was preserved on film and in a book she had written right after the war. A GERMAN LIFE is another testimonial by Goebbel’s secretary. Stark images in black and white portray Brunhilde Pomsel as a forceful, eccentric, intimidating woman who seems to have lived in a black and white world. At 103 and still very lucid, articulate and thoughtful she describes herself  as an ordinary German albeit close to one of the highest ranking Nazis but, like her friends and colleagues, ignorant of what was going on around her. She excused her lack of interest with a disciplined upbringing that focused on honesty, obedience and a work ethic that would never question her superiors. How close was she to Goebbels? She talks about his impeccable, elegant  appearance and manners that could change suddenly into a brute screaming “Wollt ihr den totalen Krieg?” At one point she says that she never saw Goebbels – the propaganda ministry was a huge building – but she spent the final weeks with him in the bunker. Traudl Junge’s interview was powerful because of her closeness to Hitler, Pomsel, on the other hand, spoke through powerful black and white images. At 103 she might not remember if or how often she saw Goebbels in person. In the 30 hours of conversation reduced by the filmmakers (also from Austria) to one hour and thereby creating a narrative that implies that Pomsel had gained some insights throughout the interview, she comes to the conclusion that God does not exist, there is only evil in the world. There is no justice. Does she feel guilty? No, she says, then all Germans would be guilty. Her confessions of ignorance and innocence are frequently intercut with archival US propaganda / educational footage about Nazi ideology and concentration camps. A bit heavy handed, I thought, unnecessary “eye openers” that sometimes cut Pomsel off in the middle of a sentence. I would have preferred to hear her speak uninterrupted, unpolished with all the contradictions that a historic document might reveal.

At the end of the Q & A at the Castro Theatre someone said that it is time, especially in this election year of turmoil and uncertainty- to hear from those who questioned, fought back or resisted oppression. Yes, I agree.